Jose Holloway is the band director at Dunbar Magnet Middle School, which is the same place where he first picked up an instrument as a student. 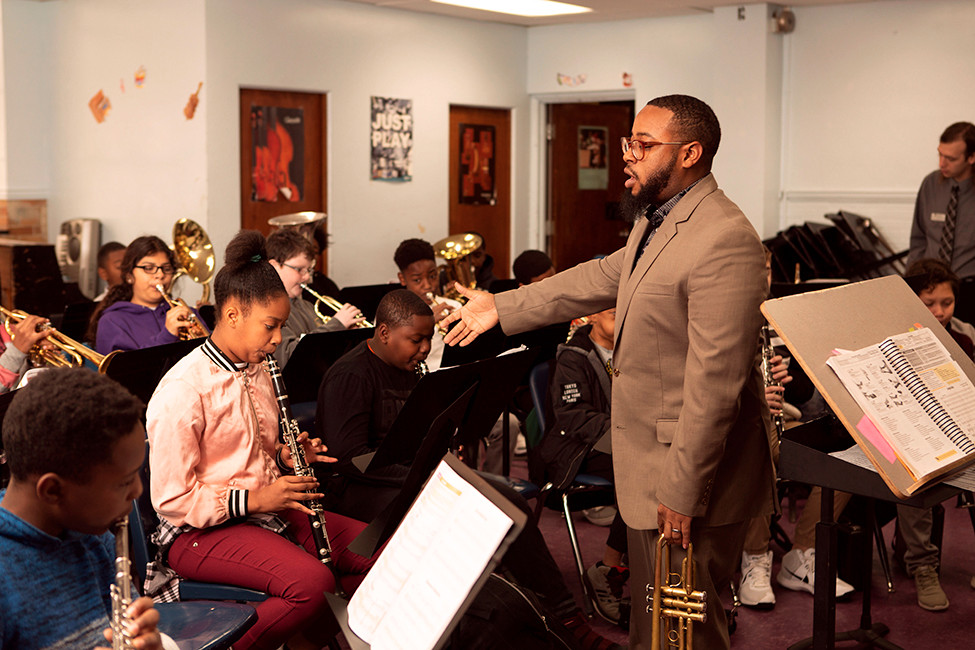 Share It Tweet It Pin It
Jose Holloway is the band director at Dunbar Magnet Middle School, which is the same place where he first picked up an instrument as a student.

Throughout his growing up, Jose Holloway was challenged to make the most of his opportunities. Nowhere was that more pronounced than when he arrived at Little Rock Central High School as a 10th-grader.

“When I got to Central, I met someone who is my idol today, Dr. Sam Meredith,” he said. “He was very hard on me to the point of saying, ‘Why did they put you in my band?’ Like, he just ran me down. I was about ready to cry, you know what I’m saying?”

When Holloway told his mother about the scathing treatment, she was initially upset at the band director. But when Holloway wanted to quit, the tide turned quickly.

“She said, ‘Oh no. We’re going to prove everybody wrong,’ and she got me in lessons and she got me a new instrument, a nice silver Yamaha (trumpet),” Holloway said. “The rest is history.”

Holloway grew into a polished musician who landed at Henderson State University on scholarship. He returned to his hometown determined to return the favor to a new generation.

“If it wasn’t for (Meredith), you know, I wouldn’t have anything I have today,” he said. “He forced me to work hard and finally be excited about something and be excellent at it. My whole life is centered around music and I want to do for every kid what Dr. Meredith did for me.”

Holloway found no shortage of challenges. When he took over the band program at McClellan Magnet High School, the roster had withered to a paltry 14 players. It was a situation he attacked with what would become his trademark passion.

“You need a skill in your life to help you get where you want to get. Academics alone won’t do it. You need a skill on top of it,” he said. “When I think about how I sold it, it was basically, you need this to save your life.”

Day after day, he preached, pushed and prayed the best out of his students and the urgency was contagious. Numbers went up. His ragtag squad grew into accomplished musicians who participated in all-region and all-state ensembles. Many attended college thanks to music.

Now he seeks to replicate that success at Dunbar Magnet Middle School, where he himself first picked up an instrument. In three years, he’s developed a jazz curriculum and musicians who have played in regional and state ensembles. Less known is how, seeing a little bit of himself in nearly every student, he digs into his own pocket to buy supplies, hustles used instruments and strives to be a difference-maker in young lives.

“You ask what I see in five years, my vision is basically a band that could compete on the level of any band in any state,” he said. “My attitude is that no matter what you look like, you have to be competitive because life is competitive.”

Do you know a central Arkansas teacher who works hard every day to inspire his or her students to learn, reach goals and dream? Click here and nominate him or her for one of our 2020 Amazing Educator Awards!