Tommy Terrific has performed for countless children, but some of his happiest magic was making two particular kids appear. 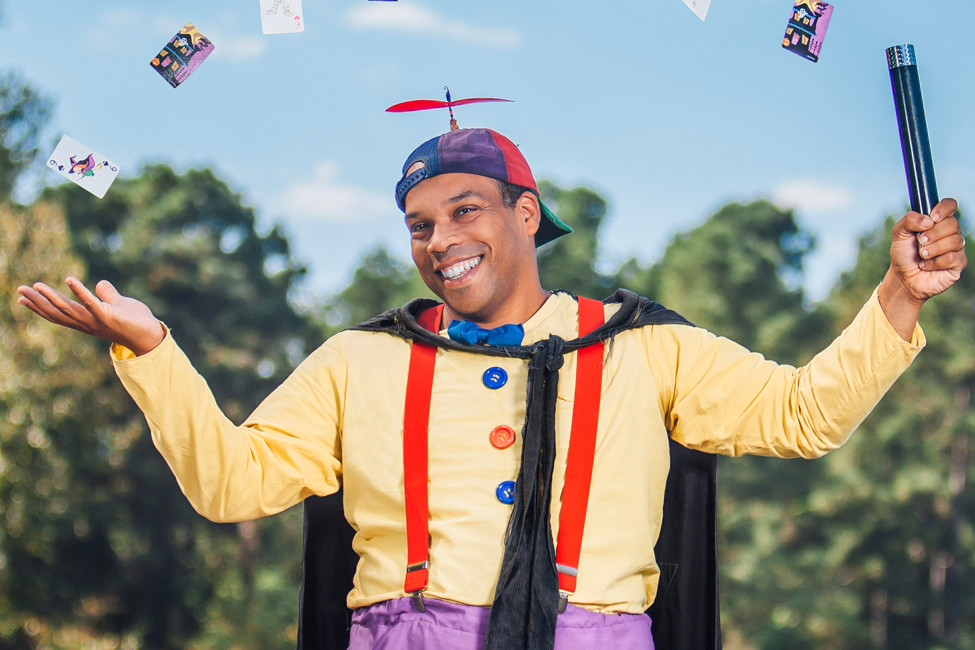 Tommy Terrific has performed for countless children, but some of his happiest magic was making two particular kids appear.

The Little Rock-based “wacky magician” conjured up a bigger family in 2014, adding Amelia and Theo, now 8 and 5, thanks to adoption and the Arkansas foster care system. There was no trick to it.

“We wanted more children, and we had found and fixed up a great old house in Little Rock,” he said in a laughter-filled interview last month. “Adoption was a wonderful way to expand the family.”

Tommy Terrific, in rainbow socks, purple shorts, a bright yellow shirt and an oversized propeller beanie, dazzles audiences at parties, schools, libraries and even in a pumpkin patch during Halloween season.

But at home, he’s Tommy Diaz, husband and do-it-yourselfer.

And to Tyus, Amelia and Theo, he’s just Dad.

Tommy found his niche performing full time after coming home to Arkansas with his wife, Lakresha, and 3-year-old Tyus in 2007. He had spent years as an actor in New York, touring in “Jack and the Beanstalk” and “Charlotte’s Web.” But he also found himself working midnight shifts as a word processor and “having a hard time at auditions because I was always so tired.”

So his father-in-law, a magician in Canada known as Weldon the Wacky Wizard, suggested that Tommy take up similar work. Abracadabra: Tommy Terrific’s Wacky Magic Show was born. “At first I was resistant, because I have a degree in theater from Northwestern University and I’m trained in Shakespeare. But I tried it, and I absolutely loved it.”

He soon longed for full-time magic, and Arkansas beckoned. 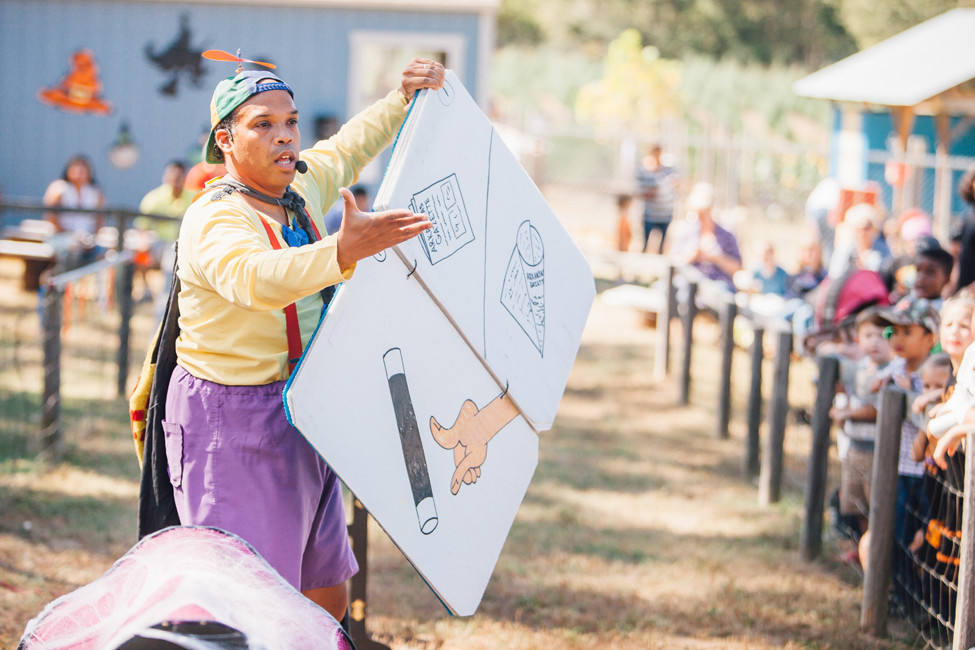 Share It Tweet It Pin It
Tommy’s show is based on a story line: He arrives at his uncle’s magic show, but the uncle doesn’t appear. Left with the props, including a huge magic book, Tommy gets kids to help him do the tricks. 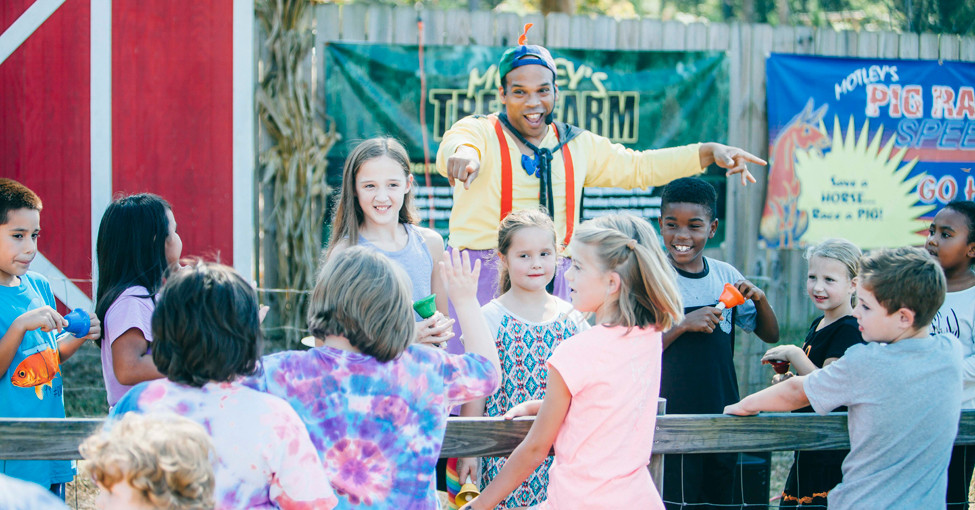 Share It Tweet It Pin It
Tommy Terrific's shows have been a hit all over Arkansas and beyond, as far away as Kansas City.

So he and Lakresha found a historic home in Little Rock, sold their three-family brownstone in New York for a tidy profit, and moved south in 2007. “We used the brownstone money to fix up the Little Rock house, and the hope was that eventually I’d be able to do the magic show full-time. Happily, that all worked out.”

The home wasn’t just any vintage house, though. Known as the Reichardt House, it is one of the 15 oldest houses in Pulaski County, built in 1871.

But the house needed TLC, including roof repairs, appliances and central heating and air. “Tyus was 3 when we moved in, and after a couple of weeks he said he was ready to go home,” Tommy said with a laugh. “We told him this is our home now.”

Once work on the house was mostly completed — “with historic homes, there’s always something, but we’re probably 90 percent there,” Tommy says — he and Lakresha soon looked to fill the empty rooms with play and laughter.

“My wife and I are both members of the Baha’i faith, and we met at a Baha’i gathering in New York,” he said. “We married in 2000 and were living in New York when Tyus was born. After a few years back in Arkansas, we started to look into the foster system.”

Tommy was no stranger to adoption. An uncle and cousins had joined the family that way, and Tommy himself had been adopted by his stepfather. “My wife and Tyus went to a foster event and they met Amelia, who was 6.” Tommy couldn’t be there; he was off doing a magic show. “But everybody hit it off. Then we were informed that Amelia had a little brother, Theo, who was 3.” They joined the family in early 2014 and were adopted that August.

“The process takes time,” Tommy said. “You have to take classes and get your house inspected and all that. Of course kids in foster care have been through a lot, which is how they end up in foster care. So there was an adjustment period. But we were enthusiastic and basically it all went smoothly.”

Share It Tweet It Pin It
Tommy Diaz, a.k.a. Tommy Terrific, with his wife, Lakresha, and children Tyus, 12, Amelia, 8, and Theo, 5, on the porch of their Little Rock home.

The children all attend Little Rock public schools, where Lakresha is a third-grade teacher. Theo’s in kindergarten, Amelia in third grade and Tyus in seventh.

They enjoy Tommy’s magic show and the premise it’s built on. The idea is that Tommy has arrived to see his Uncle Fumpernutter’s magic act, but the uncle doesn’t show up. So he is left with the props and forced to go on with the show. “I don’t know how the magic tricks work, because I’m a kid.” So he pulls a huge magician’s handbook from a bright pink magic box, and children in the audience help him make magic. “You end up getting a show that has magic and comedy rolled into one.”

He tailors the act to be educational at schools and libraries, or just plain fun at birthday parties. The themes can be imaginative. For example, a Black History Month show features a lesson about the Tuskegee Airmen, with magic tricks about objects that fly.

“I’ve done shows at schools and libraries all across Arkansas and surrounding states,” Tommy says. “The farthest I’ve gone to play a show is Kansas City; last year I traveled 20,000 miles to do shows.”

His children kids don’t make those trips with him, though. “It would be too much,” Tommy says. “They only see two or three shows a year, so they love it. If they saw much more than that, it would add up.” A little too wacky, maybe? 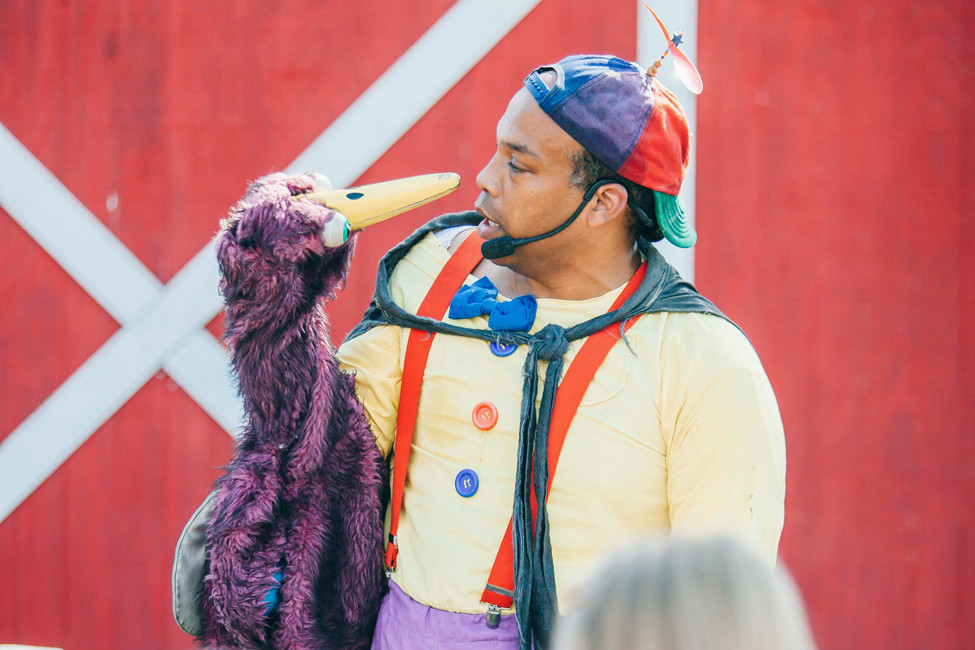