As we celebrate Father’s Day this month, let's celebrate dads who are seeking parenting partnership over sticking with traditional roles. 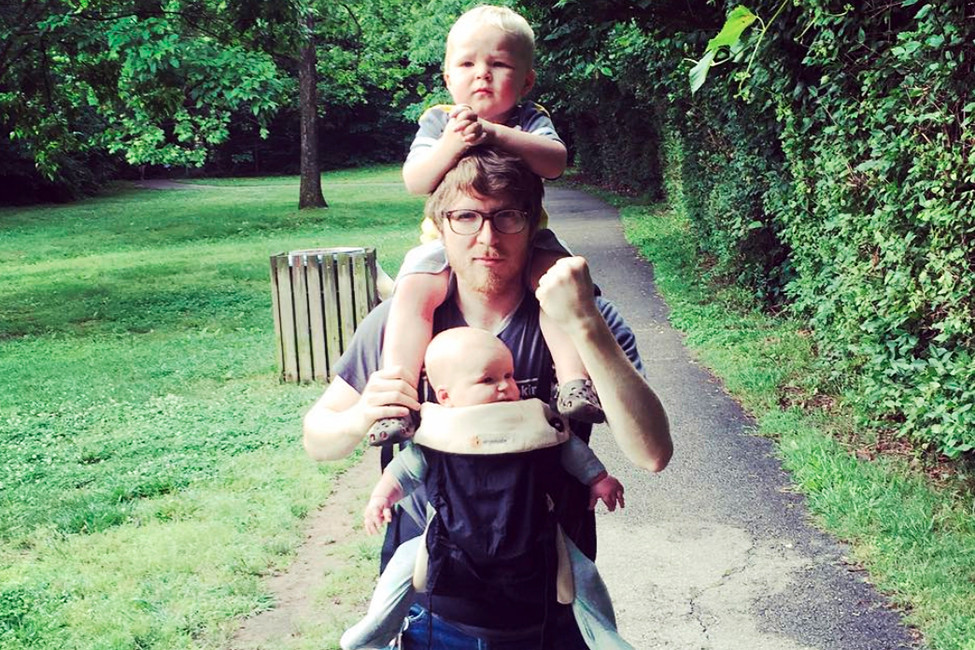 Share It Tweet It Pin It
Editor Alexis Peters' baby-wearing, toddler-carrying husband, Ike, takes on fatherhood with their boys.
When our boys were 1 and 3, my husband surprised me with a much-needed, sans-kid trip to NYC. We loved all the things (pizza, comedy, Broadway, museums, etc.), but the part of the city that really stole our hearts was Greenpoint in Brooklyn. You get big-city vibes at a slower, dare I say, family-friendly, pace.

As parents ourselves, it was impossible to miss the army of Brooklyn dads spending a Saturday morning solo with their kids. They were a baby-wearing, stroller-pushing, scooter-herding cohort.

But I didn’t have to travel across the country to see that this generation of dads is redefining fatherhood.

In Little Rock, I’ve observed dads bravely navigating indoor tube systems and dads gamely attending a 3-year-old’s birthday party. I’ve seen dads singing along at library storytime and watched as dads explore museum exhibits with their kids. I’ve also tried not to watch as dads throw kids to heart-stopping heights at the pool, and been proud to see dads trying to find jobs with companies that provide paternity leave.

It’s not that I want to applaud the anomaly of baby-wearing, stroller-pushing dads. I want to applaud that diaper-changing, meal-making, bath-wrangling fatherhood is no longer unheard of. As we celebrate Father’s Day this month, I want to celebrate dads who are seeking parenting partnership over sticking with traditional roles.

And I’m not the only one who’s noticed a generational shift. Randy Jumper of Arkansas Better Dads (ABD), an organization dedicated to empowering and equipping dads, backs up what I’ve observed in the wild. “I think most dads in Arkansas are doing a great job,” Jumper says. “As I’ve traveled the state, one thing I have found over and over is that dads are trying to be there for their kids. They are working hard to be effective and helpful for their children.”

But with new perspectives, dads are facing new challenges. We asked Jumper how we can encourage this generation of dads, and just like ABD, he offered much-needed inspiration and resources.

Pressure to Be Enough

“Generational trends in parenting are still being discussed,” Jumper says, “but millennial fathers are driven to provide for their families. I personally see a lot of guilt in fathers today. Guilt over ‘not enough.’”

Beating the Pressure: When balancing financial demands, work pressures, marital challenges and other barriers, remember no one is expecting you to be perfect. If you want to be better, take it one day at a time!

Pressure to be the Best

“‘Comparative parenting’ is a huge pressure for dads,” Jumper says. “How you parent is displayed on social media and parents want their online persona to look good. If we aren’t careful, we end up doing the ‘right things’ with our kids for the ‘wrong reasons.’”

Beating the Pressure: “Make memories and take advantage of the moments you have,” Jumper suggests. Be present, not preoccupied.

Pressure to Do More

When I asked Jumper how dads can connect daily with their kids, he encouraged a different goal. “I’d push back a bit on ‘daily’ involvement. First, there is a high percentage of non-custodial dads in the state. Secondly, we have large numbers of men who are in the military, medical field, law enforcement, truck drivers, etc.”

Beating the Pressure: “These men don’t need daily involvement. What they need is consistent, meaningful involvement,” Jumper says. “Dads who have limited time need to maximize it for the sake of their family. The key word is intentionality.”

Bottom Line: What You Do Matters

“You can’t underestimate the importance of an engaged dad in a child’s life,” Jumper says. “All studies show that an engaged father is the common denominator in preventing destructive behaviors in a child’s life. Children of engaged dads are healthier, less likely to use drugs or alcohol, perform better in school and have a generally better outlook on life.”

Resources for Dads Who Want More

► Up Your Grill Game Jul 4 Canceled: Pops on the River

Jul 4 Bryant Pops in the Park