You can see Buddy’s handiwork just about wherever you go in Pulaski County, although he is quick to give hosts of other people credit for the positive improvements to the area. Now that he has retired (using the term loosely), he plans to continue his impactful work while also making a little more time for family fun and personal enrichment. 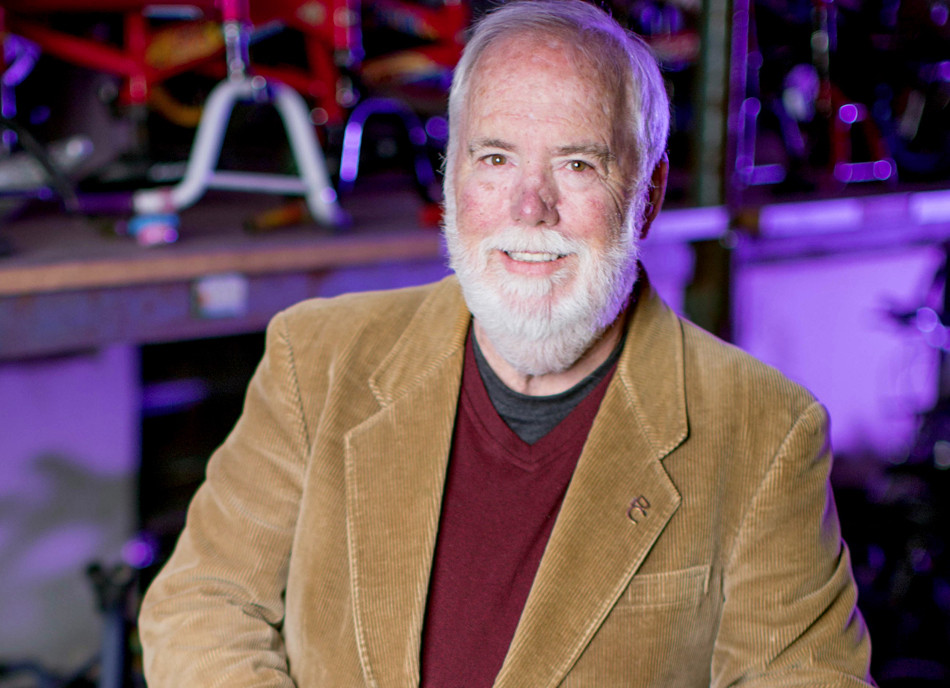 Share It Tweet It Pin It
Buddy has a new title on his calling card since retiring. It says, “Dream Catcher.” Some of his plans include working with Habitat for Humanity, storm chasing, fixing up old bikes with Ron King, taking art and piano lessons, and going on a European river cruise with his wife, Beverly.

Riding bikes at Two Rivers Park is a favorite excursion for countless families visiting and living in Arkansas. There’s something about making it over the crest of that bridge and coasting down into the park with the river breeze caressing your face. It’s a gateway into another world. Cars, technology, and the cares of society are dropped like a cell phone call on a rural road.

Deer in the double digits feed and frolic in the occasional open fields along the trail. They pop their heads up from the grass momentarily as you tool by as if to say, “Oh, hey. Thanks for coming. Enjoy your visit. I’m gonna keep eating now.”

As you enjoy conversation or the therapeutic surroundings, meander through the community gardens, roll along the river or watch nature’s cast of characters, you’re sure to fall in love with the place. You’ll also probably feel a sense of gratitude that someone had the vision to make sure a place like Two Rivers exists for people to enjoy now and on into the future. Former Pulaski County Judge Buddy Villines was that someone who had the vision.

“When you make a decision, consider the impact of that decision today, but also seven generations to come,” Judge Buddy Villines paraphrases an old Iroquois Chief’s tribal council comments. “Great communities are places to live, work and play. Take that approach and think about places within that place – opportunities to experience – places where people just want to be,” he says. Those ideas are just part of what inspired Pulaski County Judge Buddy Villines throughout his multi-decade public service career. Now that he has retired (using the term loosely), he plans to continue his impactful work while also making a little more time for family fun and personal enrichment.

You can see Buddy’s handiwork just about wherever you go in Pulaski County, although he is quick to give hosts of other people credit for the positive improvements to the area. “It takes lots of people to make a difference. Without Barbara Richard, Sherman Smith and many others on staff who had the right attitude, none of this would have happened,” Buddy affirms.

Buddy’s campaign slogan throughout his entire career was, “Together, we CAN make a difference!” It’s also his mantra for life. “I want people to remember that about me and that there IS a way to get things accomplished that’s most successful,” he says.

“My father, grandfather and great grandfather were all Methodist preachers. I thought a lot about the idea of being called to service. Everyone is called in some way to serve,” he says. “Also when I was in sixth grade a teacher signed my yearbook, ‘Buddy Villines-You have a lot of potential,” shares Buddy. “My life is about service and doing things, not about the things that I’ve gotten. Over the years, people would talk to me about running for higher offices. I’ve not been part of local government for the office, but to do the things I thought needed to be done and then let the voters decide.”

His Road to the River Project and Beyond 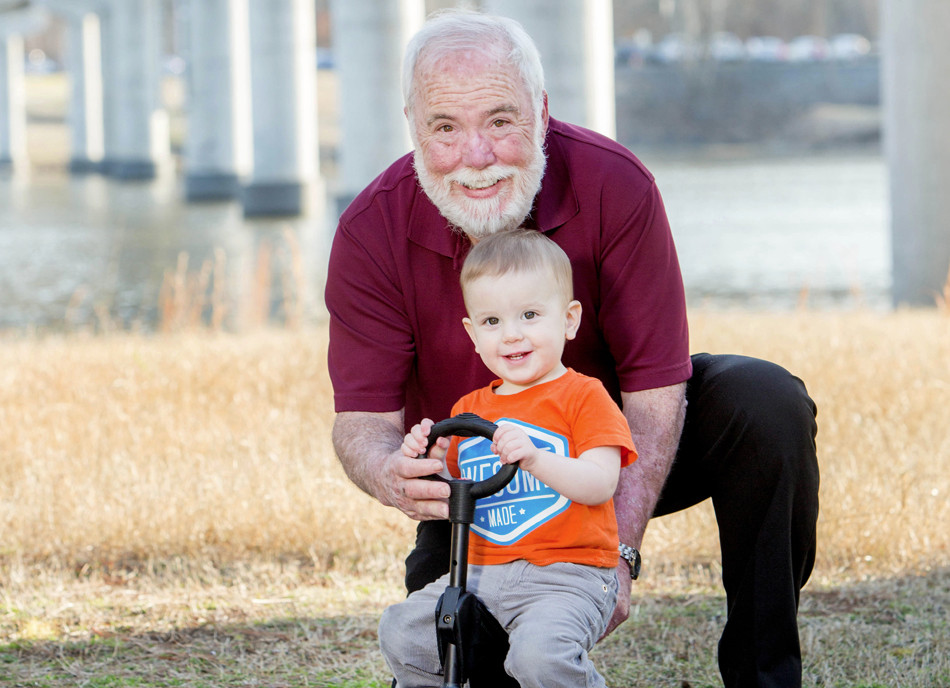 Share It Tweet It Pin It
Buddy enjoys an early spring day at Two Rivers Park with grandson, Carter.

While Buddy attended Hendrix College, he won several class elections and was later elected head of the Arkansas Student Government Association. It was during that time he met many state political leaders. He then served in Vietnam and went to law school. His first offices included Little Rock Zoning Officer and Deputy City Manager.

During the late 1970s, he met his wife Beverly at a church activity. They have two daughters, Meredith, 37, and Corey, 32. Meredith has a daughter, Hazel Rose, 4. Corey has a son, Carter, 18 months and is pregnant with her second son. Corey is married to Charles Brooks. “Parenting and living in the public eye can be difficult. You have to find a shield. It has also been very good for Meredith and Corey though. They are both very issue oriented and conscientious. No matter what I’ve done in my life, the greatest thing I’ve ever been a part of is the birthing of my children,” Buddy lovingly explains.

Buddy never liked negative campaigning. He says, “You can complain or you can try to do something.” That was inspiration for his all-time campaign slogan and his continued work in public service. His work progressed from Little Rock City Board Member to Vice Mayor to Mayor in 1989-90. He shares, “There were more issues that stretched beyond city limits to the region. I reached out as mayor to other mayors. Then I worked to resolve differences as County Judge. I represented all of the same people then. The sales tax to build Verizon Arena passed because of everyone working together.”

“Anytime there are new ideas…the more important an idea is, the more criticism it’ll receive. You have to stay focused on what you’re trying to do,” Buddy says. Buddy met with considerable opposition when it came to his ideas for the Big Dam Bridge and the Two Rivers Bridge and Park because the projects seemed too far-fetched and expensive. “People said we can’t do it and that we needed to cut our losses,” Buddy shares. “Leadership is sometimes like that. You have to just decide and do it.”

“The projects have had a remarkable impact. They have changed the culture of the community. All of the pieces impact the family. There are testimonials of people who have said the bridges have changed their lives. In an era of obesity, kids get interested in activity instead of video games. At any given time, you can see family groups and a real cultural mix. That’s why we have the “Family” sculpture by Kevin Kresse out there. It’s the story of what’s going on. A hundred years from now there’ll still be that scene – people teaching kids to ride bikes, people with pets, moms with strollers,” he explains.

He feels the work that has been accomplished in Pulaski County promotes the idea that “we can do things we didn’t think we could do. The next generation will say let’s see what WE can do now.”

When asked what his favorite work over the years was Buddy responds, “I can’t really say. I see a community like a mosaic. Every piece is important to the whole. We started great youth programs to provide a place for kids during the height of the gang wars. Water, sewer and community parks and improvements, the Two Rivers Bridge, the Junction Bridge, the Rock Island Bridge, the River Rails. All those things are important and became an integral part of the whole. We did it for people with families and it made sense for the community.” 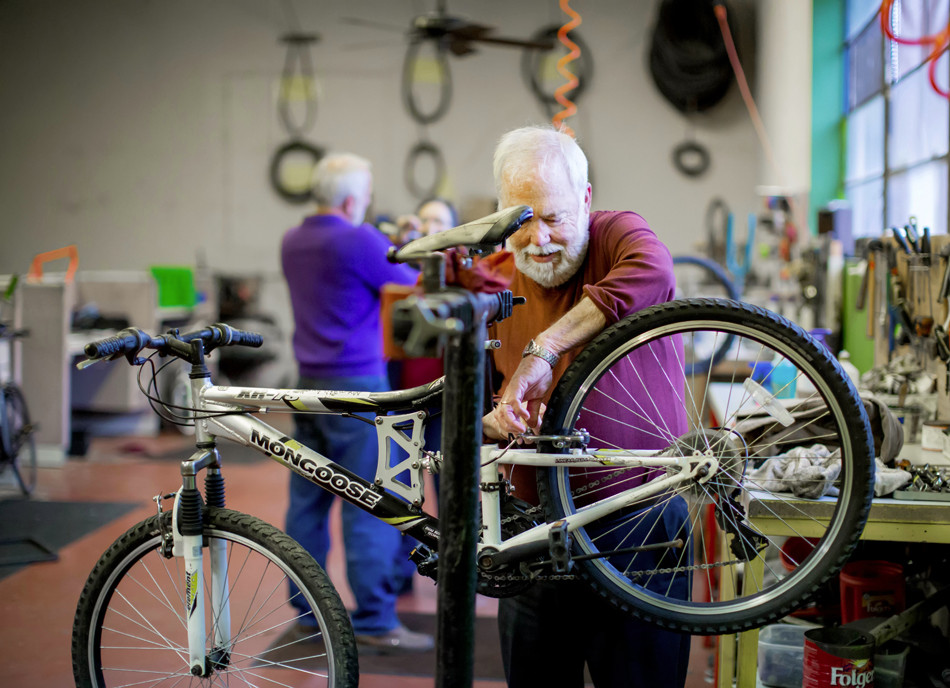 Share It Tweet It Pin It
Buddy intends to continue fixing up old bikes for those in need with his friend Ron King. King’s group, Bikes for Kids, gave away 7,000 bikes last fall.