Follow along with Kat Robinson and her daughter Hunter as they spend spring break road trippin' along Arkansas' Scenic Highway 7. Their fifth day was spent exploring scenic stops, state history and natural caves. 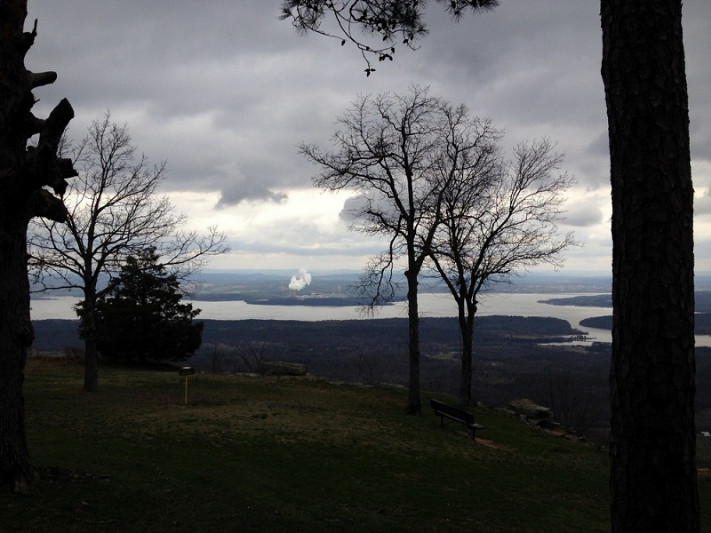 Spring Break is a great time to travel to a destination and enjoy experiences with your family. But what do you do when you’re used to travel? For me and my daughter Hunter, it’s time for a road trip.

Last week, we traveled the entire length of Scenic Highway 7, the longest state highway in Arkansas. We found attractions along the way and share where we went. 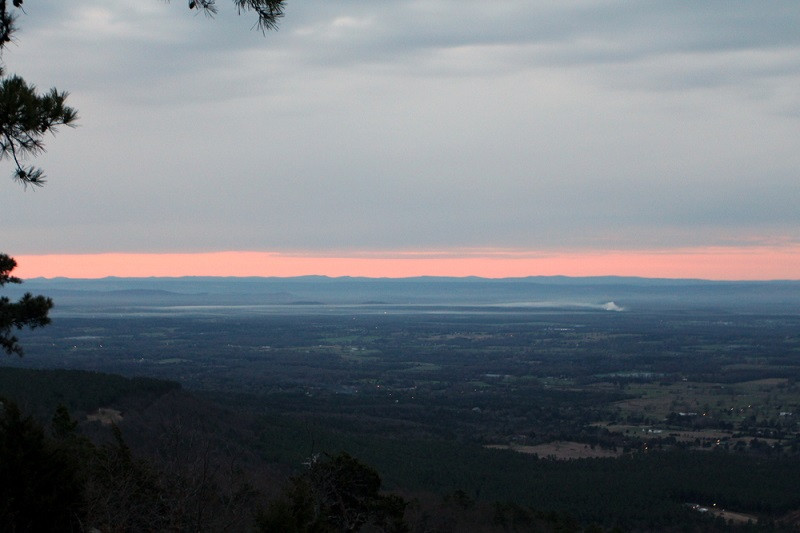 Friday morning, I was up before dawn so we could watch the sunrise on Mount Nebo. Hunter, though, was having none of it, so I walked down to the Rim Trail just below our cabin and watched it myself. 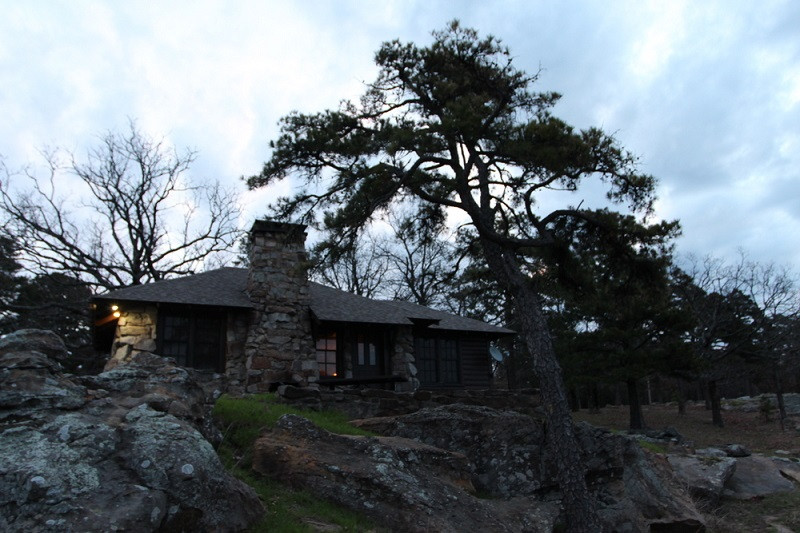 I noticed the birds waking and getting louder over the several minutes it took for the sky to get brighter. The sunrise was just around the corner of Mount Nebo, but the colors spread in bands across the horizon. 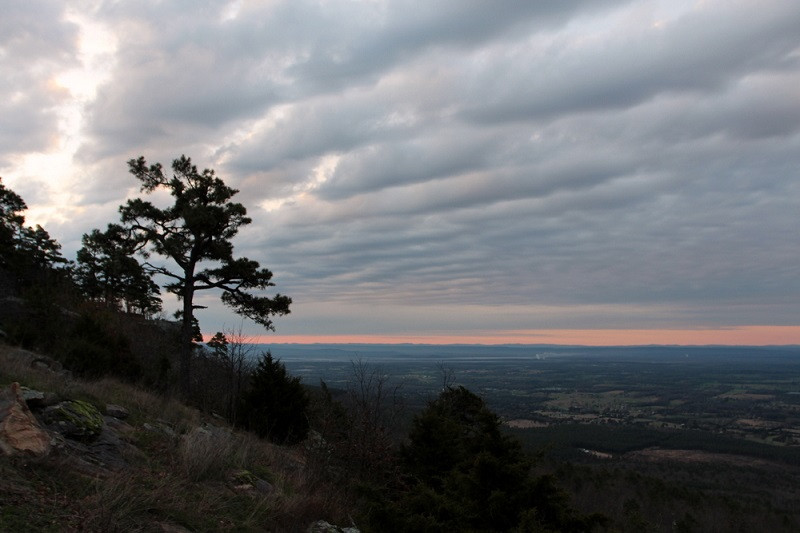 There was a large bird with a red crest I spotted in a bush not far from me. He went flying after a sparrow a few moments after I saw him. 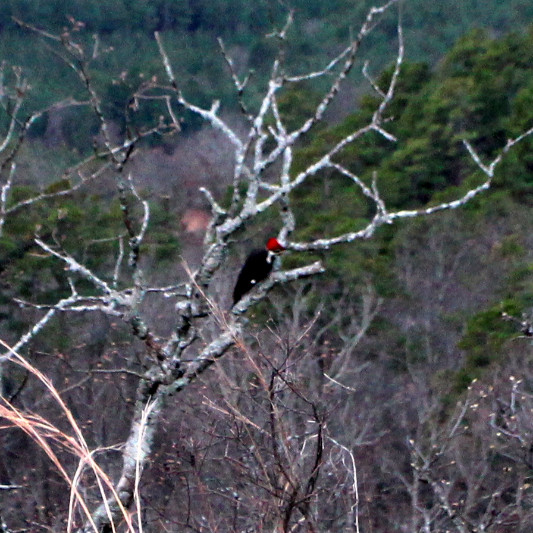 Once Hunter got up and we had breakfast, we spent time relaxing and looking around. We noticed that the bread that Hunter had put out for the birds the previous night was gone, but it wasn’t birds that had taken it. 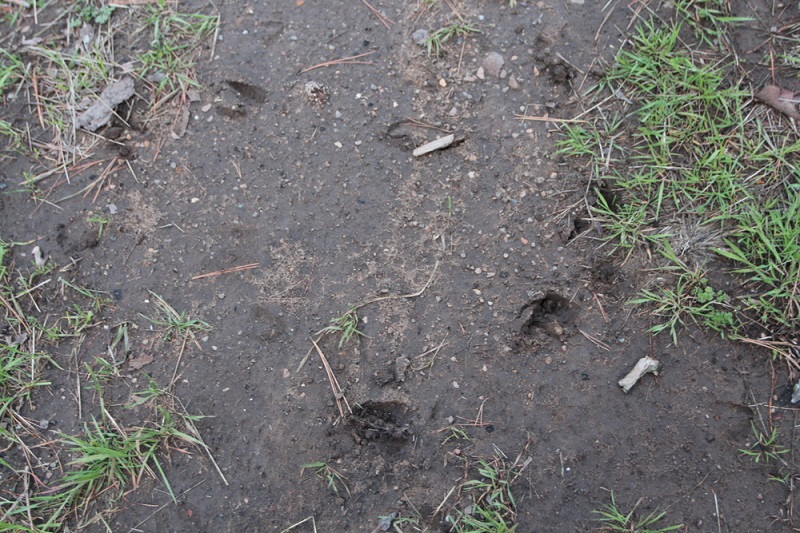 It appeared to be deer. We were able to figure that out, thanks to the Animal Tracks, Scat and Sign program we attended at DeGray earlier this week. 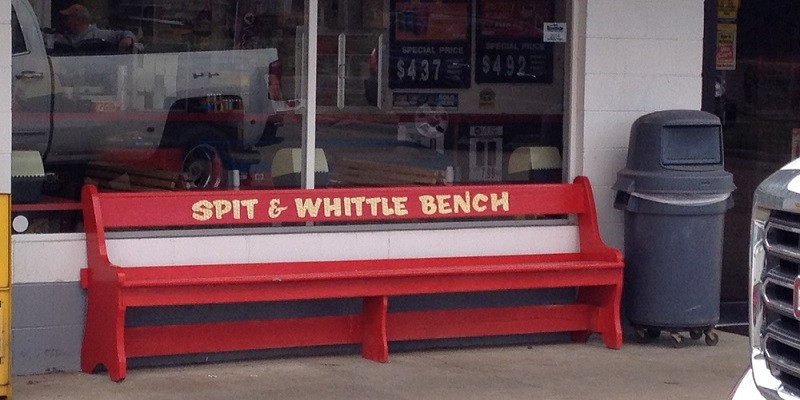 Hunter wasn’t feeling her best, so we took it easy, leaving Mount Nebo around noon. We stopped for gas and saw this amusing bench. 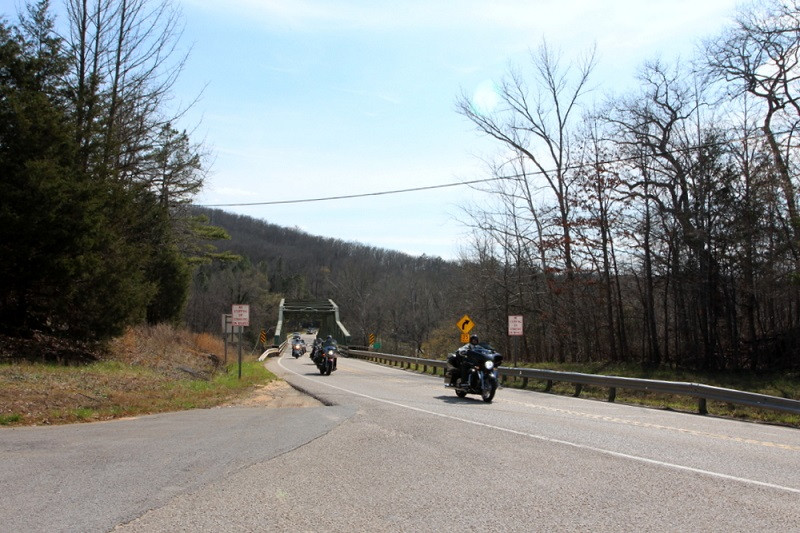 And then off we went up Scenic Highway 7. Through Russellville and up into Dover, the highway is five lanes, but once it gets into Dover, it goes back to a two lane road. 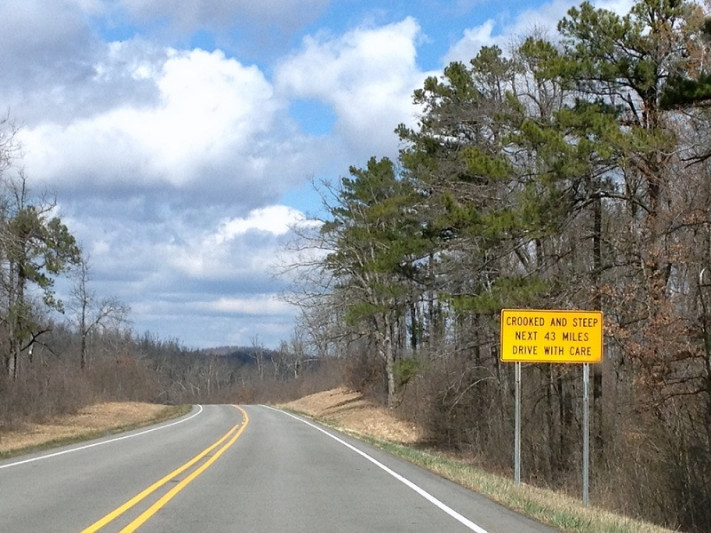 And after it leaves town, a rumble strip accompanies the double yellow stripe in the road. There’s even a sign that states the next 56 miles are steep and curvy. 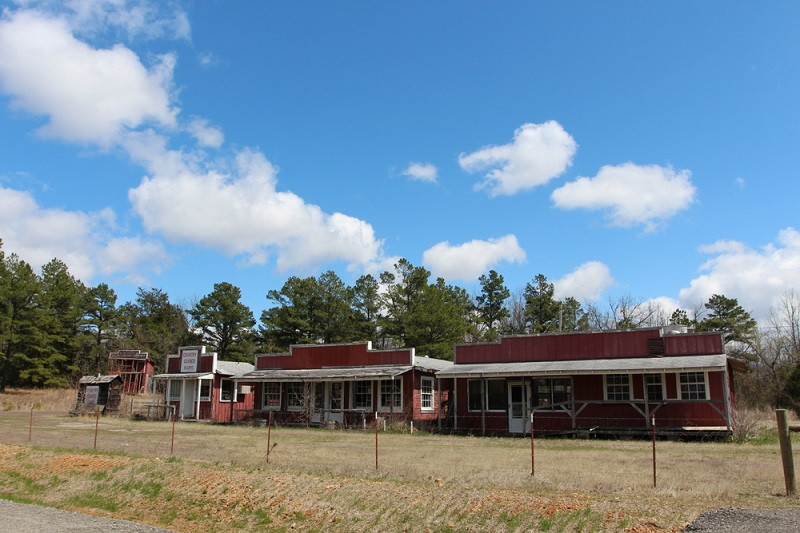 We stopped briefly to take a photo at the old Booger Hollow Trading Post. It’s been closed eight years now, and it’s starting to really fall apart. The double decker outhouse out back has seen the worst of it, but there are also busted windows and open doors now. The property is fenced off from the road. It’s very sad to see. 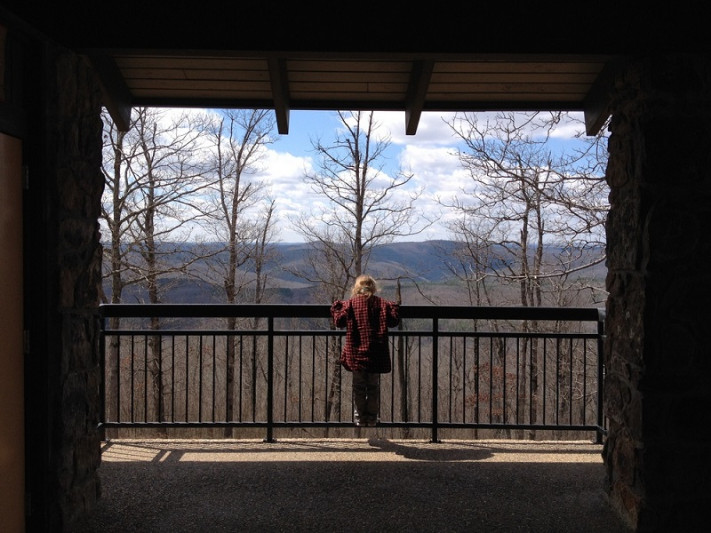 Something good to see, though, is Rotary Ann. This rest stop, located just inside the Ozark National Forest atop a mountain, was the very first rest stop in Arkansas. Back in the 1930s, the wives of Rotarians noted the heavy traffic along the highway and decided it needed a good stopping place. They worked to raise funds to have this structure completed. Today, it’s an unmanned 24-hour rest stop with clean restrooms and a magnificent view to the west. 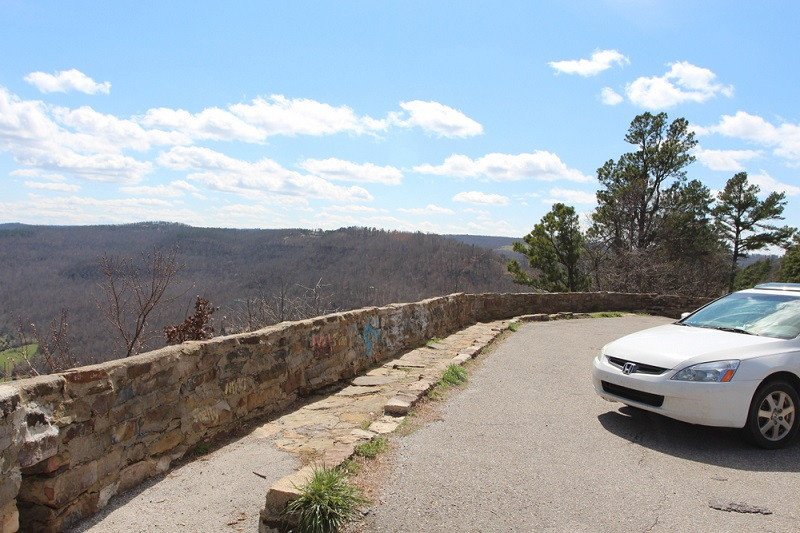 Share It Tweet It Pin It
Overlook of the Arkansas Grand Canyon, a deep valley to the east of Scenic Arkansas Highway 7

There’s a lookout several more miles up the road that has a great handmade rock wall. This place gives you a great view from the south end of what’s called the Arkansas Grand Canyon, a deep valley to the east of Scenic Arkansas Highway 7. The lookout spot is big enough for several cars to park, and I always try to stop and take a photo here. It was constructed as a "thank you" to the Arkansas Farmers Union Green Thumb, and was built between 1966 and 1969. 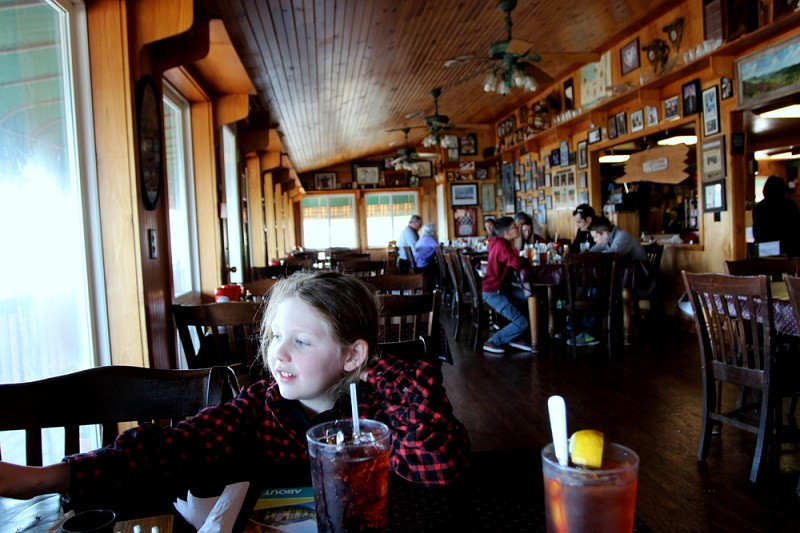 We decided to stop for a bite to eat at the Cliff House Inn. This restaurant, perched on the edge of the Arkansas Grand Canyon, has a magnificent view of the valley below. It also has a whole lot of memorabilia from Scenic Highway 7’s glory days, when places like Booger Hollow and Dogpatch USA were still in operation and the entire length was studded with motorcourt hotels and restaurants for travelers to try. The Cliff House Inn also has the pie of the Arkansas Sesquicentennial, the Company’s Comin’ Pie, which is a meringue-crusted pineapple cream pie.

Hunter wasn’t feeling too well, so she poked at her vegetable place. I rather enjoyed the homemade chili, which was full of big chunks of ground beef and had cheese on top.

Hunter had picked up a brochure along the way, and shared it with me. She really wanted to go see a cave, so we decided to amend our plans. Instead of going to see the Elk Education Center in Ponca, we decided to stay on Highway 7 and go to Mystic Cavern and Crystal Dome. 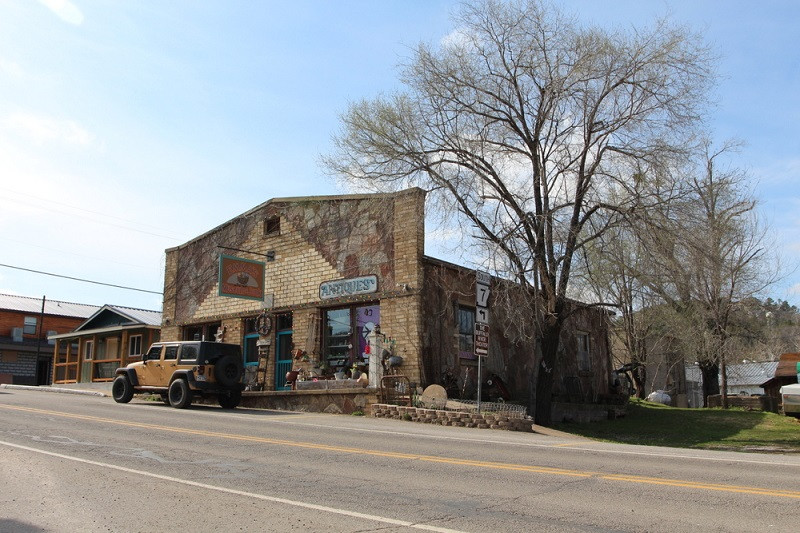 Back on the road, it wasn’t long before we passed Scenic Point at the highest point along this section of Arkansas Highway 7. We quickly descended into Jasper, which is a lovely and quaint little town that’s home to the second oldest restaurant in the state (The Ozark Café), a nice bakery, the Buffalo Theater and Emma’s Museum of Junk. 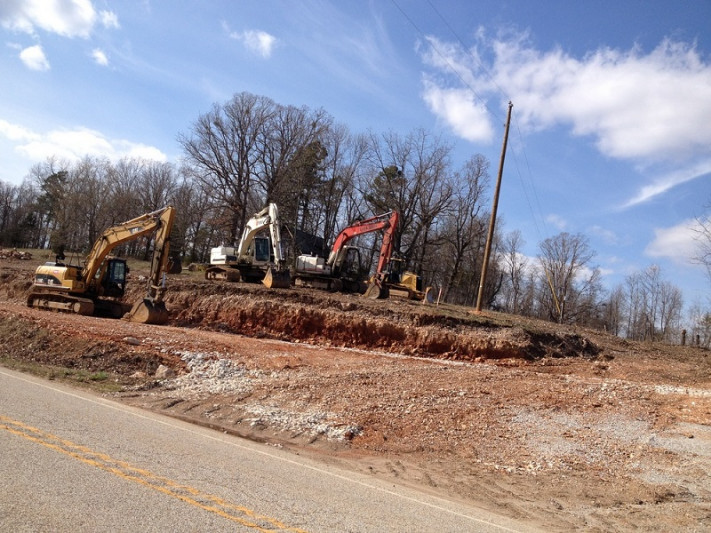 On the north side of town, we noticed a lot of construction going on. It looks like the road may be widened in this area. 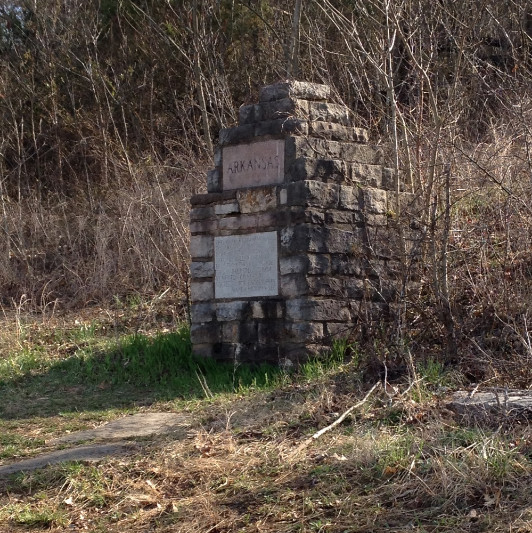 Share It Tweet It Pin It
The Washington Monument in D.C. was built with stones from every state, and this marker commemorates the place where the Arkansas stone originated.

Just past the turnoff to The Hub, there’s the turnoff for Mystic Caverns and Crystal Dome. We went up and managed to get in on the last two tours of the day. 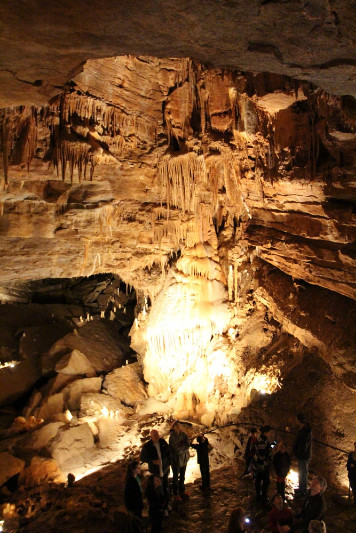 Crystal Dome was our first cave. Mind you, it’s a 300-foot incline to walk down before you get to the entrance, and you then go 110 feet down into the cave. 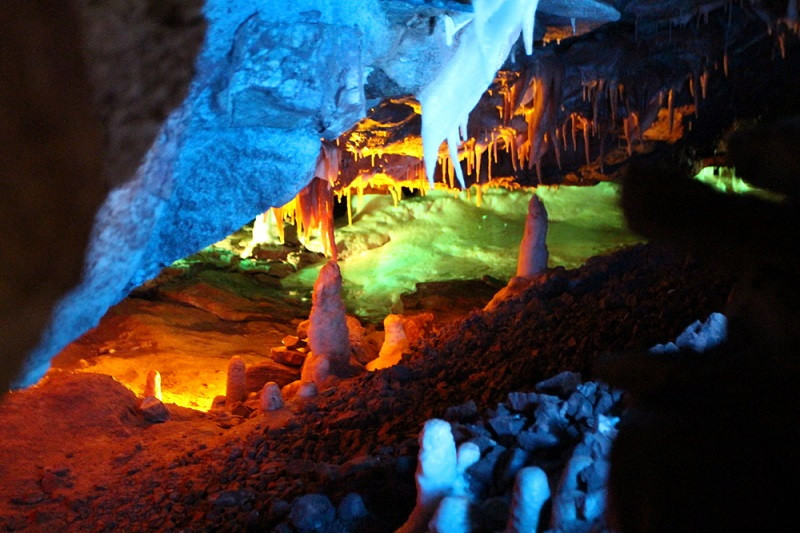 But it’s beautiful, full of stalagmites and stalactites in a living cave. Millie, our guide, showed us different figures inside the cave, including what appeared to be a dragon. She also had us look up when we got to the bottom, to see the crystal dome overhead that gave the cave its name. 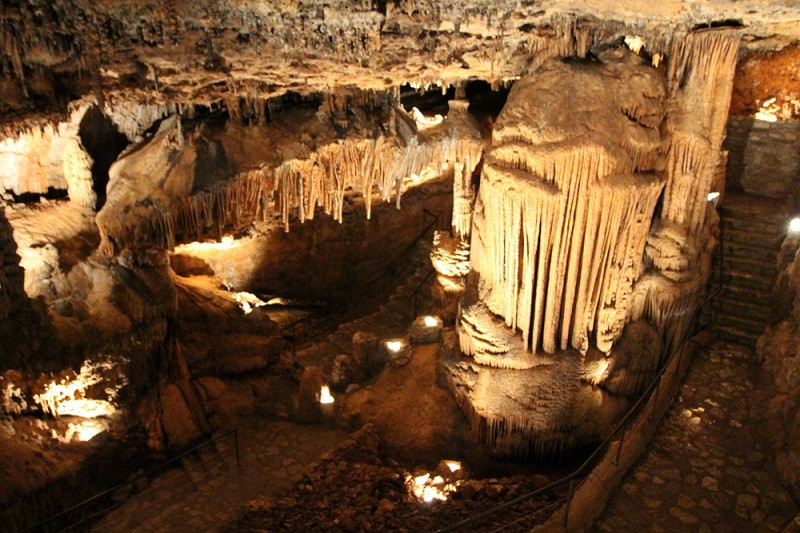 Crystal Dome was discovered in the 1960s, after people were aware of how caves grow and live. Mystic Caverns, the other cave we went in, was discovered long before. It was accessed for a long time by a ladder down a sinkhole…but when it was purchased by Dogpatch USA, an easier access was created. 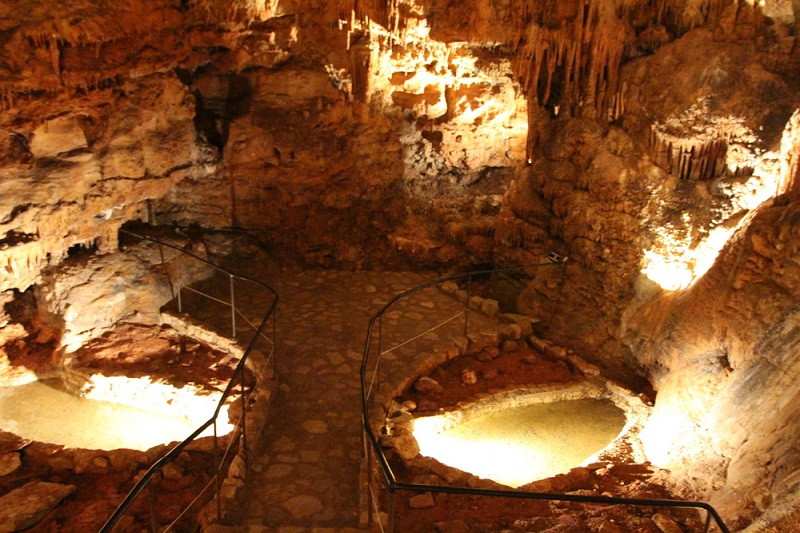 The sad part about Mystic Caverns is that it’s no longer a living cave. It is full of history, though. Back during Prohibition, moonshine was made in the cave and people would climb down the ladder to drink. Eventually it became a speakeasy, where bands and people who wanted to dance could come down and enjoy themselves.

In many places, the cave is stained with smoke. Many of the stalagmites and stalactites were removed by people who sold them for quick cash back decades ago. But it’s an interesting cave to tour, and I suggest if you go, you should take both tours so you can see the difference and learn a whole lot.

That evening, we stayed at the Hampton Inn in Harrison. After an hour and a half of climbing around the two caves and several days on the road, we were pooped. But not too pooped for Hunter to go do her favorite thing--swimming in the hotel’s indoor pool.

Tomorrow we’re going to go trout fishing at the easiest place to fish anywhere I know… and tomorrow night, we’re going to stay in a treehouse. No joke!

If you’d like to read more about our adventures, feel free to check out my blog, Tie Dye Travels.

Follow along with Kat Robinson and her daughter Hunter as they spend spring...

Follow along with Kat Robinson and her daughter Hunter as they spend spring...