An Epic Spring Break on US Highway 71: Day 6

An Epic Spring Break on US Highway 71: Day 6

Spring break isn't over yet! Food and travel writer Kat Robinson traveled US Highway 71 with her daughter Hunter to map out family-friendly itineraries throughout Arkansas. On Day 6, the duo explored the Clinton House Museum in Fayetteville and the Daisy Airgun Museum in Texarkana. 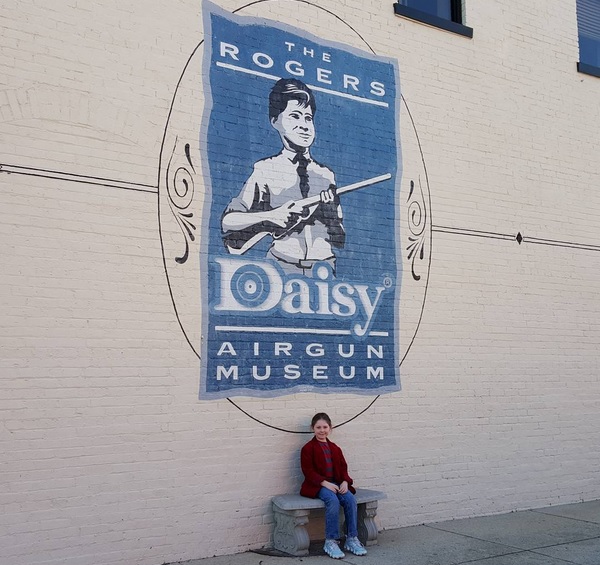 This week, thousands of Arkansas students and their families will be spending time away from school as our schools let out for a well-deserved break. But what can you do with that sort of time?

Last year, my daughter Hunter and I set out along Scenic Arkansas Highway 7 and explored it from one end to the other to bring you all sorts of ideas on activities you can undertake with your family. This year we’re at it again, and we’re exploring US Highway 71, which runs from the Louisiana border to the Missouri State Line.

Each day this week, we’ll share an itinerary for adventure. You are welcome to follow along! And to share your experiences along the highway, please feel free to tag us with #SpringBreakOn71.

Friday morning, Hunter was a little sluggish getting out of bed at The Chancellor Hotel. But soon we were up and out and looking around Fayetteville.

We met Kody Ford for an early lunch at Hammontree’s Grilled Cheese, half a block off Dickson Street. He told us about some of the great upcoming things happening in Fayetteville, and we tried some of the restaurant’s excellent fare, such as this Jack to the Future sandwich with tomato basil soup.

Kody took us over to the Clinton House Museum for a tour. This was the first home for Bill and Hillary Clinton. The story goes, Hillary Rodham would come visit Bill when he was a professor at the University of Arkansas, and one day when they were driving around town this house caught her eye and she told Bill how much she loved it.

When he picked her up from the airport on her next visit, he drove her by the house and told her he bought it and that she’d have to marry him now. And she did, in the living room. This is a replica of the dress she wore.

Hunter’s favorite part was the garden, and even though few flowers were in bloom, she was thrilled to learn that one of Hillary Clinton’s favorite flowers is the daffodil. We saw daffodils throughout our trip.

We had to make an emergency stop after the Clinton House Museum at a drug store for some oral pain reliever… Hunter is, strangely enough, teething. One of her front teeth came in during the early portion of our trip, which was expected. What wasn’t expected was the emergence of some of her molars! A little bit of gel fixed that right up.

Thanks to the tooth pain, Hunter was not in the mood for a snack, so we skipped our expected stop of Neal’s Café in Springdale and drove on to Rogers, where our first visit was to the House of Webster. This log cabin houses an operation that’s been going since 1934. It’s best known for its jellies and jams, but also sells mustard, syrup, preserves, mixes, bacon and so many more edible things.

I had told Hunter we’d be stopping for jelly, but I don’t think she was prepared for what she saw here.

From there, we went on to the Daisy Airgun Museum downtown. Hunter was amused by the bricked streets (there are more in Rogers than in Texarkana) and posed outside.

Inside, the number of airguns is truly overwhelming. Anything you might ever want to know about airguns is there: when they were created (some date back to the 16th century); where Daisy airguns came from (they were originally a promotional item from a windmill factory); which ones were most famous (Red Ryder, of course, as evidenced by "A Christmas Story"); and what did Daisy do during World War II. You can even purchase your own Daisy airgun in a variety of colors, even pink, at the museum.

We headed to the Embassy Suites in Rogers once we were done there, and were pleased to end up in one of the brand new renovated rooms on the ninth floor. The hotel is in the middle of a top-to-bottom revival, and we were charmed by the lovely L-shaped sofa in the living room of our suite where I could sprawl on the lounge and catch up with my writing while Hunter read. And so our day ended quietly.

Up next: Rogers and Bentonville. Stay tuned for more itineraries as we share our fun throughout the week.

Kat Robinson is a food and travel writer based in Little Rock. She travels Arkansas and the South searching for good stories, tall tales and the next great little restaurant. Read about more of her adventures at TieDyeTravels.com.

An Epic Spring Break on US Highway 71: Day 5

An Epic Spring Break on US Highway 71: Day 4