Jessica Smolsky rushed to her blackboard at Conway Junior High School to erase what a student had written. With a few swift strokes, “Coach Smolsky Rocks!” was gone, but she couldn’t hide many other clues to the impact she’s had as an eighth-grade science teacher and dance coach. 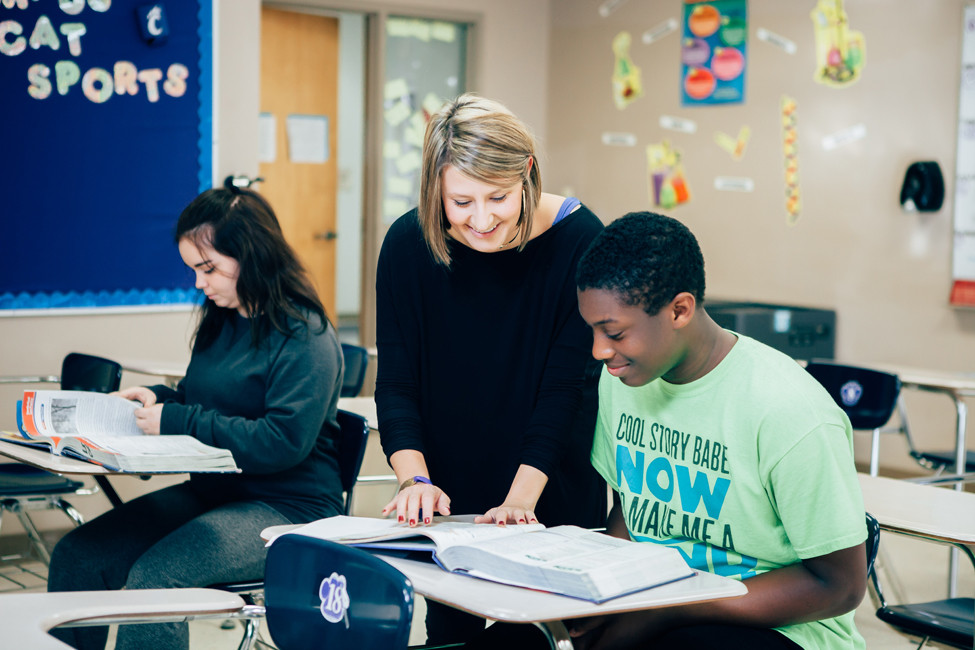 Jessica Smolsky rushed to her blackboard at Conway Junior High School to erase what a student had written.

With a few swift strokes, “Coach Smolsky Rocks!” was gone, but she couldn’t hide many other clues to the impact she’s had as an eighth-grade science teacher and dance coach. A Christmas tree with a Santa hat on top stood by the window, trimmed with student-made ornaments in the shape of atoms. Across the room were pinned suggestions, many in jest, for how she might improve her classes. A replica check for $750 from the Conway Public Schools Foundation sat on the chalk holder, money she dedicated to upgrading the science “escape room” that was a huge hit last year.

Another big check announced her selection as a Little Rock Family Amazing Educator for 2017.

“I love my job and I love my job here,” said Smolsky, now in her second year in Conway after starting her career a bit farther up Interstate 40 in Morrilton. “I’m really real with the kids; I don’t sugar-coat things. I talk to them like human beings, and let them know I love them, but I also try to be humorous in class, with a light and open atmosphere. The staff also supports you here, and lets you try new ideas.”

The escape room, a physical adventure game in which players locked in a room must use elements around them to solve puzzles to escape, is a good example. After the event last year, parents were calling the school to say how their children were talking about it, and as Smolsky herself put it, “who wants to go home and talk about science class?”

Smolsky described herself as energetic, athletic and loud. She played volleyball, basketball and softball in high school at Cabot, and after studying kinesiology and health at the University of Central Arkansas, she worked for an add-on license that allows her to teach science through eighth grade.

“Ever since I started playing sports I knew I wanted to be involved in education,” she said. “I coached several sports in Morrilton, and I love coaching dance here now.” Her 6-year-old daughter, Madison, plays behind the dancers. “It’s a fun way to grow up, seeing the dancers, being in the dugout.”

Smolsky said she was shocked to receive the Family honor. “I didn’t even know I was nominated. No idea, but I’m very happy. And I want to thank the administration and my peers for making it possible. There’s a great atmosphere here. There are many teachers and 1,500 students, but we’re all in this together. I love kids, first of all, and I love this age group. I like to see them succeed, even in small things. I expect them to bring their attitude and effort every day.”

Smolsky has a special plan for spending the $1,000 Amazing Educator prize, and Madison is likely to love it. “My daughter and I are going to do something over Christmas break — take a short trip, maybe to St. Louis, but definitely somewhere that has an American Girl Dolls store.”