The Art of Grandparenting

The Art of Grandparenting 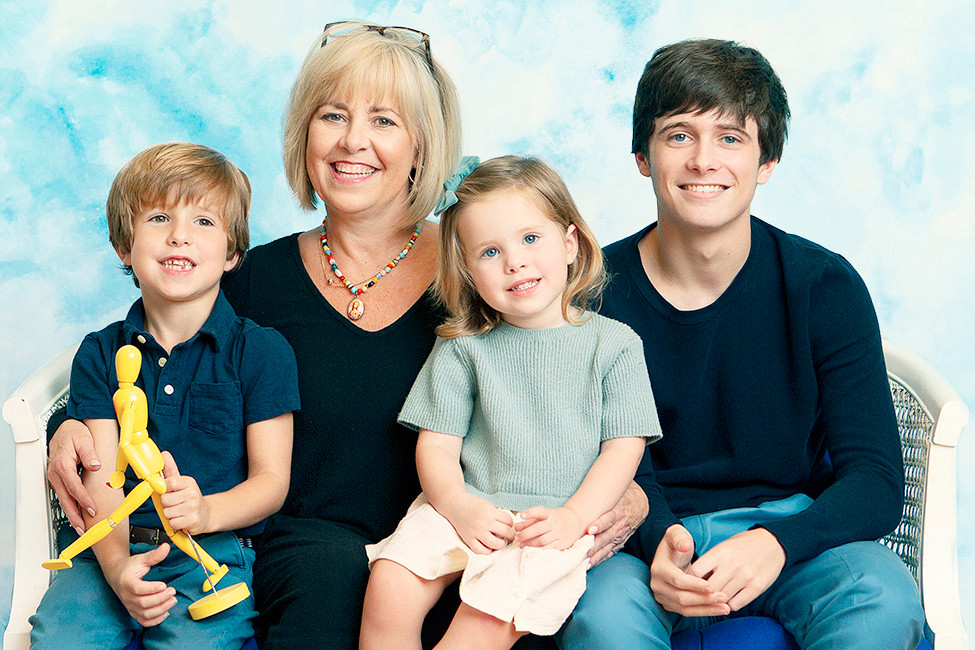 Share It Tweet It Pin It
Mona Bowers loves growing her relationships with each of her grandchildren with one-on-one time and creative exploration. Her oldest granddaughter, Brighton Barnard, is a student at University of Arkansas and the younger three are still in Little Rock: Liam Strother, 6, Livingston Mae Strother, 3, and Cade Childers, 15.

For Mona Bowers, parenting has been one of her greatest joys in life — and now grandparenting is coming in a very close second.

Her relationships with each of her grandkids is unique, but one commonality is evident: her desire to simply be present and engaged. As a retired elementary art teacher, art has always been one of the ways she connects and engages with those around her.

“My career in art started when I was in elementary school,” Bowers said laughing.

She says she’s always been drawn to various forms of creative expression, especially drawing and painting. And her own grandmother was one of the first people to inspire her to explore the arts.

“My grandmother was very, very creative, and at a young age she taught me to sew,” Bowers said. “I’ve always just loved working with my hands.”

But Bowers’ grandmother, or Nanny as she called her, wasn’t just a creative influence. She was also the person Bowers considers a wonderful example of how to grandparent, demonstrating patience and love at a level that Bowers looks back on and admires.

“If I had to pick out a grandparent that I’ve learned a lot from, it was mine,” Bowers said. “My nanny, my daddy’s mother, was amazing … She was always so patient and so willing to listen and willing to let me have my opinion even if she felt like later on she had to guide me a little bit or straighten things out. She never made me feel like I was wrong about something, maybe just needed to be steered a little bit.”

Just as she tries to emulate her nanny’s patience and listening skills, she’s also continuing to pass on a love of creating to her own grandkids — something she believes is important for every child. Although she retired from teaching in public schools a couple years ago, she now works in the private sector and still believes strongly in the importance of kids using art as a form of self expression.

And it doesn’t matter whether those kids consider themselves to be artists or not, because as Bowers says, “There’s not one of the core curriculum subjects that the arts don’t help.” 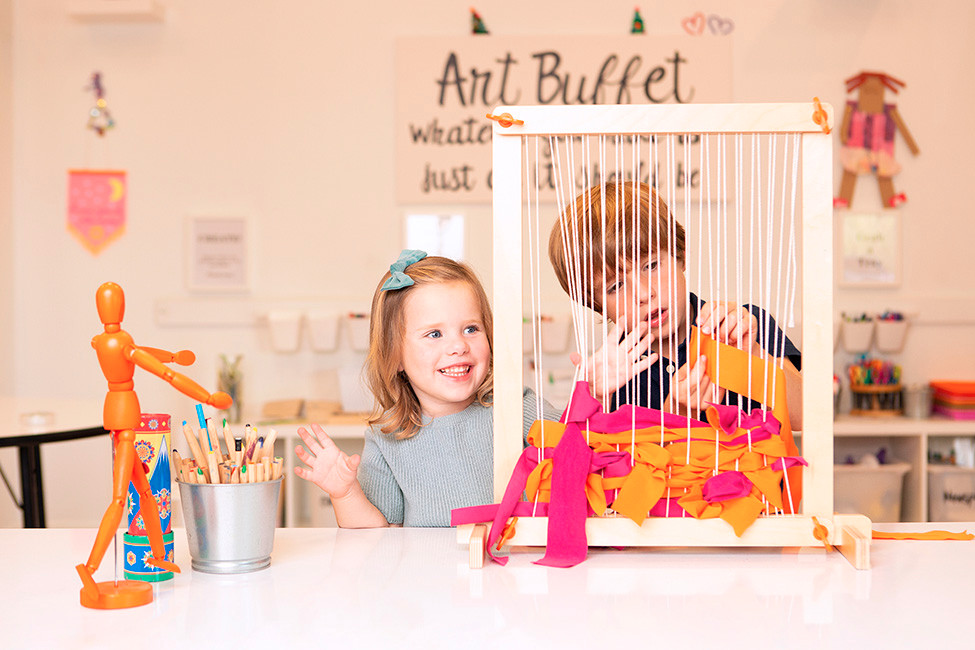 Share It Tweet It Pin It
Livingston Mae Strother, 3, and her brother Liam, 6, weave fabric strips into a loom to create a bright and colorful design.

While it may seem like Bowers has an advantage when it comes to creativity and children, she says that any parent can encourage a love for the arts in their kids — and she hopes they do just that.

Here are a few ways she says you can encourage creativity at home and use art as a way to bolster child development.

Providing supplies and a designated area for creativity is Bowers’ step one.

“Give a child a dedicated space, or even just a basket with supplies — and if they make those supplies available to them, it gives the child an opportunity at any time to go do that,” Bowers said.

She said that having art supplies available doesn’t mean a $100 shopping trip at Hobby Lobby, but rather resourcefulness. Starting out with a box of crayons, toilet paper tubes, old buttons or a hodgepodge of other supplies gives kids options and you can build the supply from there.

Creating alongside your child gives you an opportunity to have different types of conversations and communicate in nonverbal ways. Bowers says that art can give children a new way to express themselves.

As you join in the creativity, it’s important to let the child lead. Young kids are less likely to care about what people think, and therefore are more inclined to create freely. However, in order to continue to promote that creative spirit, don’t make assumptions about their creations but rather invite them to explain.

“Instead of saying to children, ‘What is that?’ in a negative way, always just approach it as ‘Explain this to me. Tell me all about it!’” says Bowers. “Let the child give you information — don’t approach it where you say ‘Oh, that’s a great dragon!’ and they’re like ‘It’s a turtle.’”

4. Broaden Your Definition of Art

Bowers says that creativity doesn’t always come in the form of a drawing or painting or another typical display of art. She and her daughters often spent time cooking and decorating, both of which she considers forms of art and expressions of creativity.

As a grandmother, Bowers loves diving in and playing with her grandkids.

“We just get messy! We’ve always done that,” she said. “Even just playing in the mud and stuff like that … I always try and encourage experiences with them opposed to the new and latest thing.” 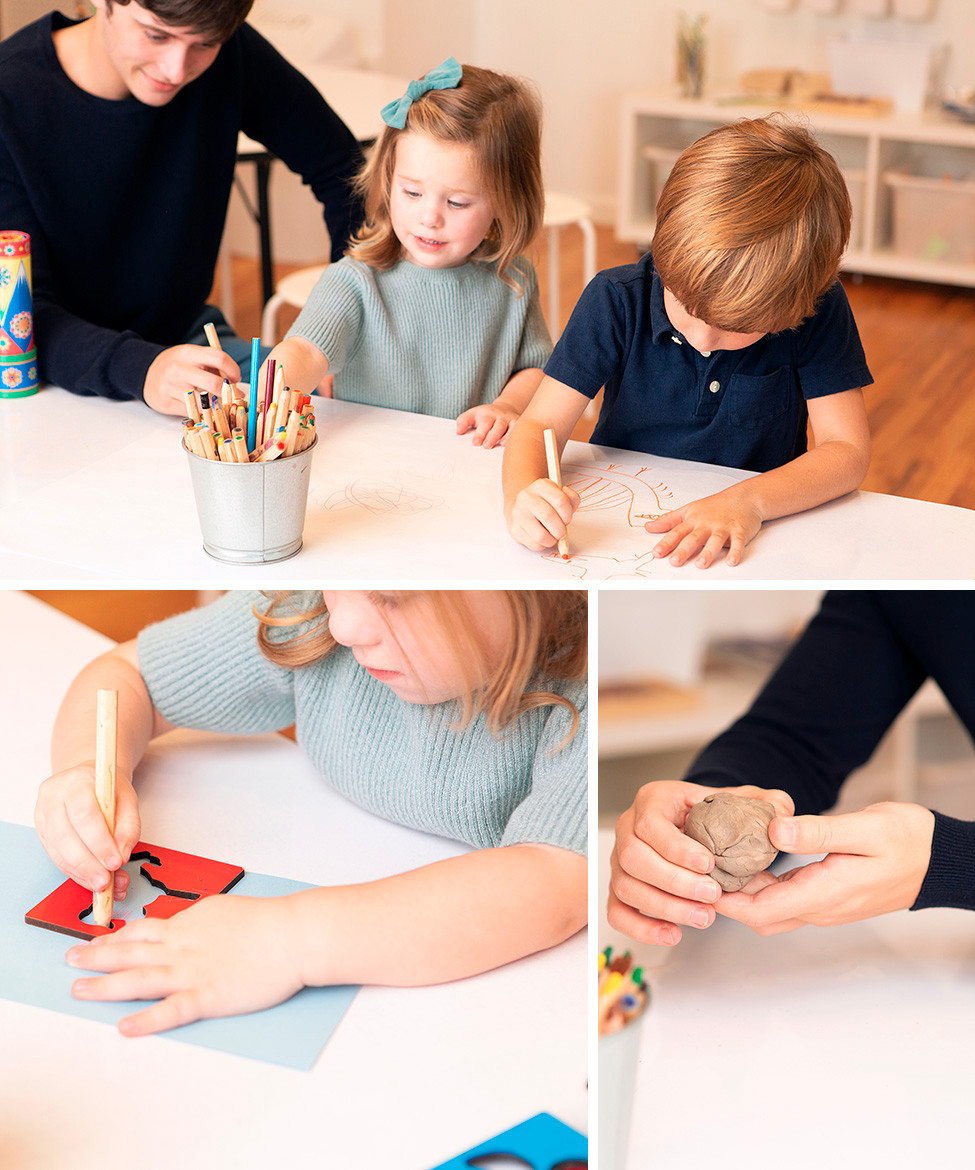 Share It Tweet It Pin It
Cade Childers, 15, helps his cousins 3-year-old Livingston Mae Strother and 6-year-old Liam Strother to draw and encourages their creativity.

Bowers recently launched a new project that gives kids the opportunity to create an abstract masterpiece. Aptly titled “The Abstract Project,” these sessions guide little artists through the completion of a piece of custom artwork using a custom color palette and a variety of media such as paint, pastels and markers.

Since Bowers teaches these sessions on an individual basis, the project is highly customizable — from size to style to colors. By the end, the student(s) will create a piece fit for proud display at home.

“Creating abstract art requires an open heart, an open mind and a big imagination, all of which children innately possess,” Bowers said.

Projects can take anywhere from 45 minutes to several hours depending on the size and complexity. For more information or to reserve a session of The Abstract Project for your child, call Bowers at 501-379-9175. 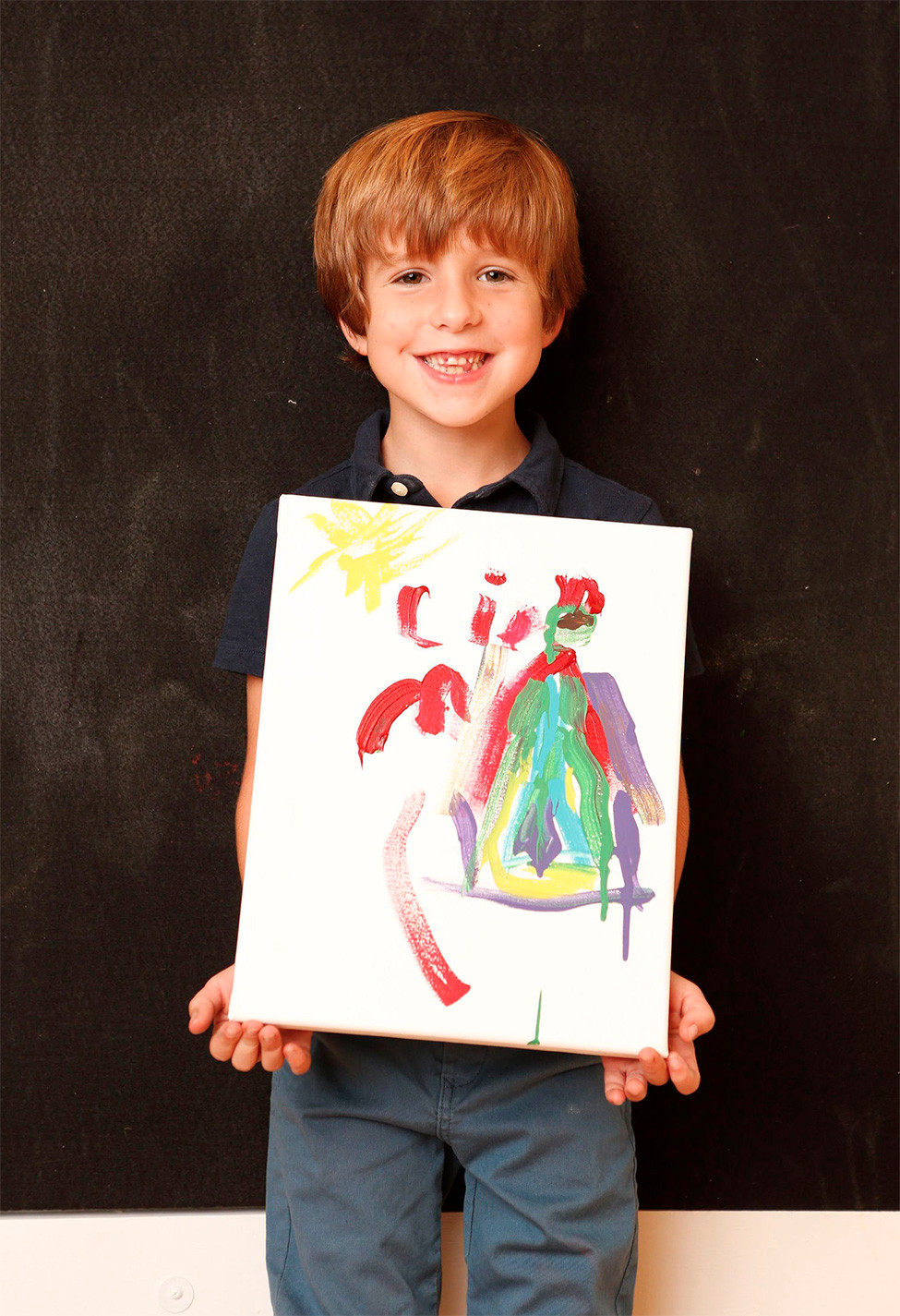 Share It Tweet It Pin It
Art smarts run in the family for Liam Strother, who picked up his skills from his grandmother, retired art teacher Mona Bowers.

May 29 Postponed: Godspell at Wildwood Park for the Arts