It's Dishoungh White's easy grace and passion that makes him a favorite teacher of his peers and students. 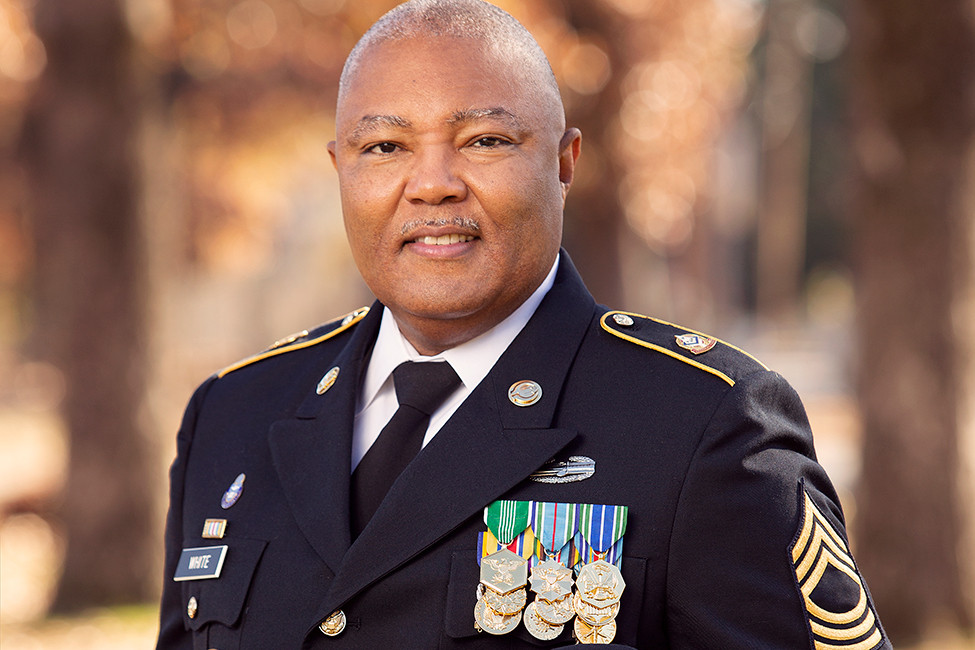 One aspect that makes our Amazing Educator presentations so much fun is the element of surprise. For each presentation, the Little Rock Family and Delta Delta teams work with school administrators to invite our winners to a meeting that, unbeknownst to them, is in their honor. And Mr. Dishoungh White, sixth grade science teacher at Cloverdale Middle School, was easily lured to his school library in early November to help “plan his school’s Veterans Day program.”

The guise was an easy choice. His principal and school staff knew that after serving 36 years in the Arkansas Army National Guard that White would eagerly come to discuss honoring our nation’s retired military. Even after learning the real purpose of our surprise Zoom, White joked that he still wanted to discuss the program while everyone was gathered. And it’s that easy grace and passion that makes White a favorite of his peers and students. In fact, his nominations came from his fellow teachers who saw and recognized his outstanding dedication to his students in and out of the classroom.

His peers applauded his ability to engage students — even in a virtual setting. Wanda Ruffins, Cloverdale principal, recognized that while getting students to tune in online is a challenge, Mr. White has no problem. “We will have to agree that whatever Mr. White is doing...his students say ‘I’ve gotta go, because I have Mr. White’s class.’” In fact, White's strategies and online lesson plans are currently being used as a template for all Little Rock School District sixth grade science teachers to utilize for the upcoming school year.

White has exhibited a natural ability to teach since high school. As a senior at Central High School, White took a course that included assisting a kindergarten teacher with her class. “She noticed that I displayed the key traits that would make me a great teacher someday.” And while he majored in business at Ouachita Baptist University, he ultimately “decided on teaching and the rest is history!”

White’s 30-year history of teaching took him from an elementary classroom to the troubled Cloverdale on the recommendation of his principal. In 2005, White implemented a JROTC program at the middle school “to help maintain discipline and give the students pride in themselves and in the school.” The program's success is outstanding. The only JROTC on the middle school level in the state, the Cloverdale group receives color guard requests from a wide variety of organizations and has performed in Little Rock School District's Red Ribbon Week Rally, before the governor and for the MLK Commission on numerous occasions. White’s dedication to the group runs deep — he funds his cadets’ uniforms as needed and volunteers his lunch hour to training.

Next year will see another chapter in White’s career. He plans to leave the classroom and the Arkansas Army National Guard to teach JROTC full time at a nearby high school. Even in his new role, White will still enjoy what he loves best about being an educator — getting to touch the lives of so many children. When he sees a former student around town, he always asks what’s going on in their lives. “I feel proud and in a small way that I feel that I had a little bit to do with their success.”